Nintendo software and hardware sales data from 1983 to present

Archivist
I'm going to keep this thread updated with new, more up to date info whenever is possible.

UPDATED WITH DATA UNTIL DECEMBER 2021 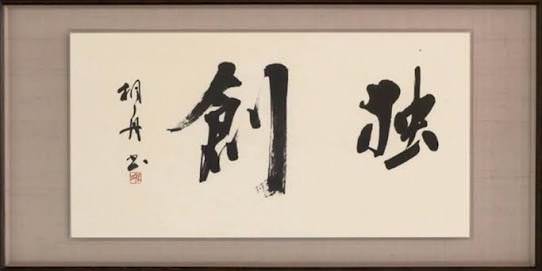 What does the following data represent?
The data here presented is either financial data or shipment data provided by Nintendo itself directly from Nintendo's Public Relationship department, Nintendo official site or other reports which reported Nintendo's shipment data.
The hardware and software data refer to the worldwide level, unless otherwise specified.

The software sales included in the software lists pertains:
- Games published by Nintendo which shipped more than 1 million units.
- Only original game releases are considered (for instance the sales from re-releases on Virtual Console or retro mini consoles aren't include).
- Include software units bundled with the hardware.
- Digital sales are included only for the games that had a digital version available at the time (basically since WiiU/3DS).
- Digital only games are excluded.
- The software sales figures can be considered close to definitive or definitive with the exception of software for NSW which is still an active console.

There are cases in which Nintendo has the publishing duty only for certain markets therefore the sales data here presented cover only those markets.
When this happens it is specified within parenthesis.

Note about Pokémon:
Take with a grain of salt Pokémon Yellow and Crystal sales presented in the Game Boy list because contrary of the rest of the entries these two are estimates.
Nintendo's official word is that Pokémon Red/Blue/Green, Yellow, Gold/Silver and Crystal combined have shipped about 76 million units worldwide.
Please take the combined figure instead of the single entries for Pokémon Yellow and Pokémon Crystal if you need an official source.

Read second post for some sources.
Also in the below posts there are other interesting trivia and data.

Videogame Console with interchangeable software** (in million of units):

Note: Virtual Boy total shipment is until March 1996. So may not be definitive as the system was discontinued in the fiscal year ending March 1997.

* What is referred as "First-party software" is actually an approximation calculated by summing every million-seller.
Since most Nintendo games sell at least 1 million units it should be a close enough approximation.

Note: Combined NES Classic and SNES Classic have shipped more than 13 million units as December 2018.
The sales figure above refer to the last time Nintendo gave specific update for the single console. 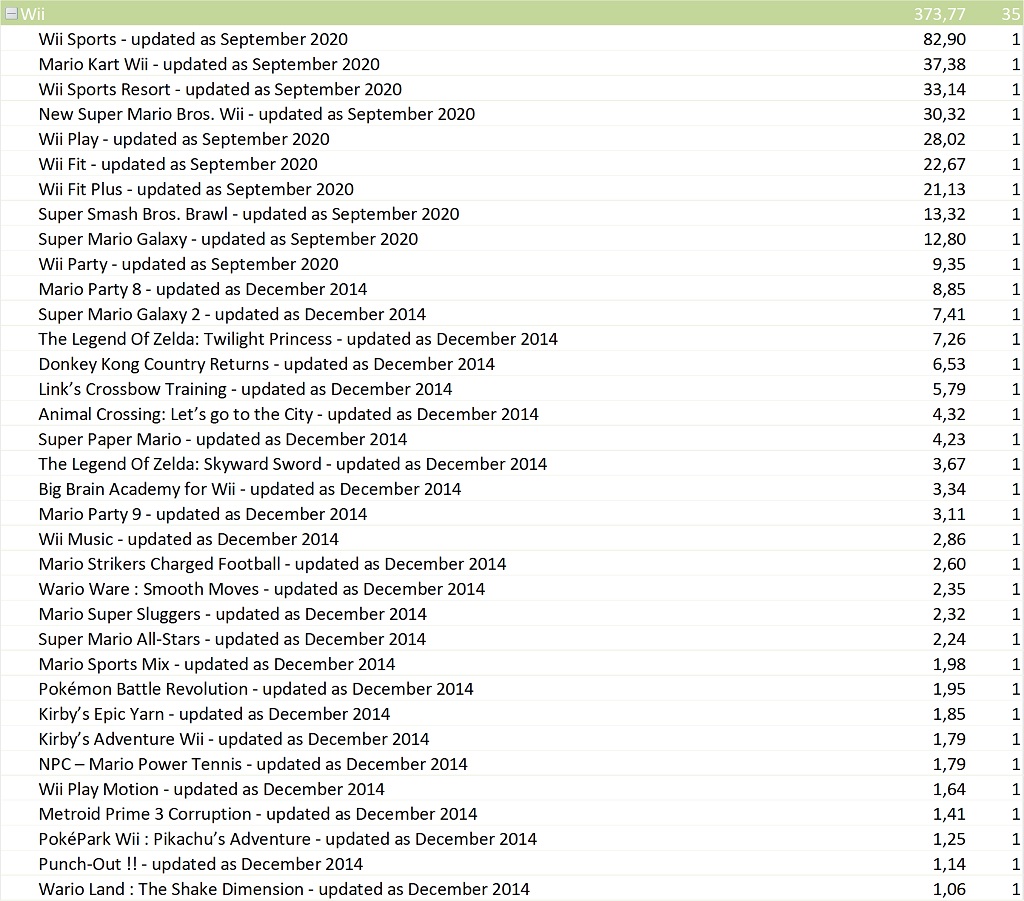 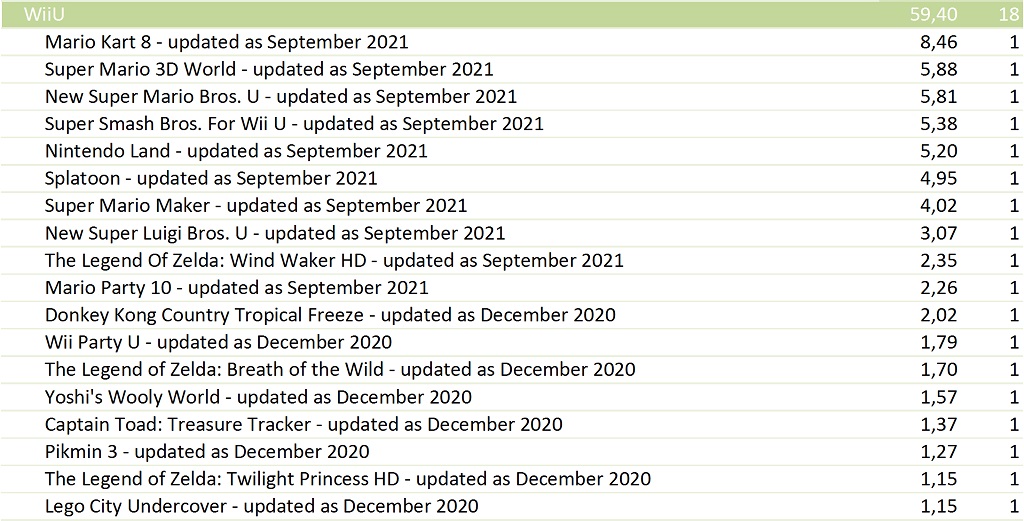 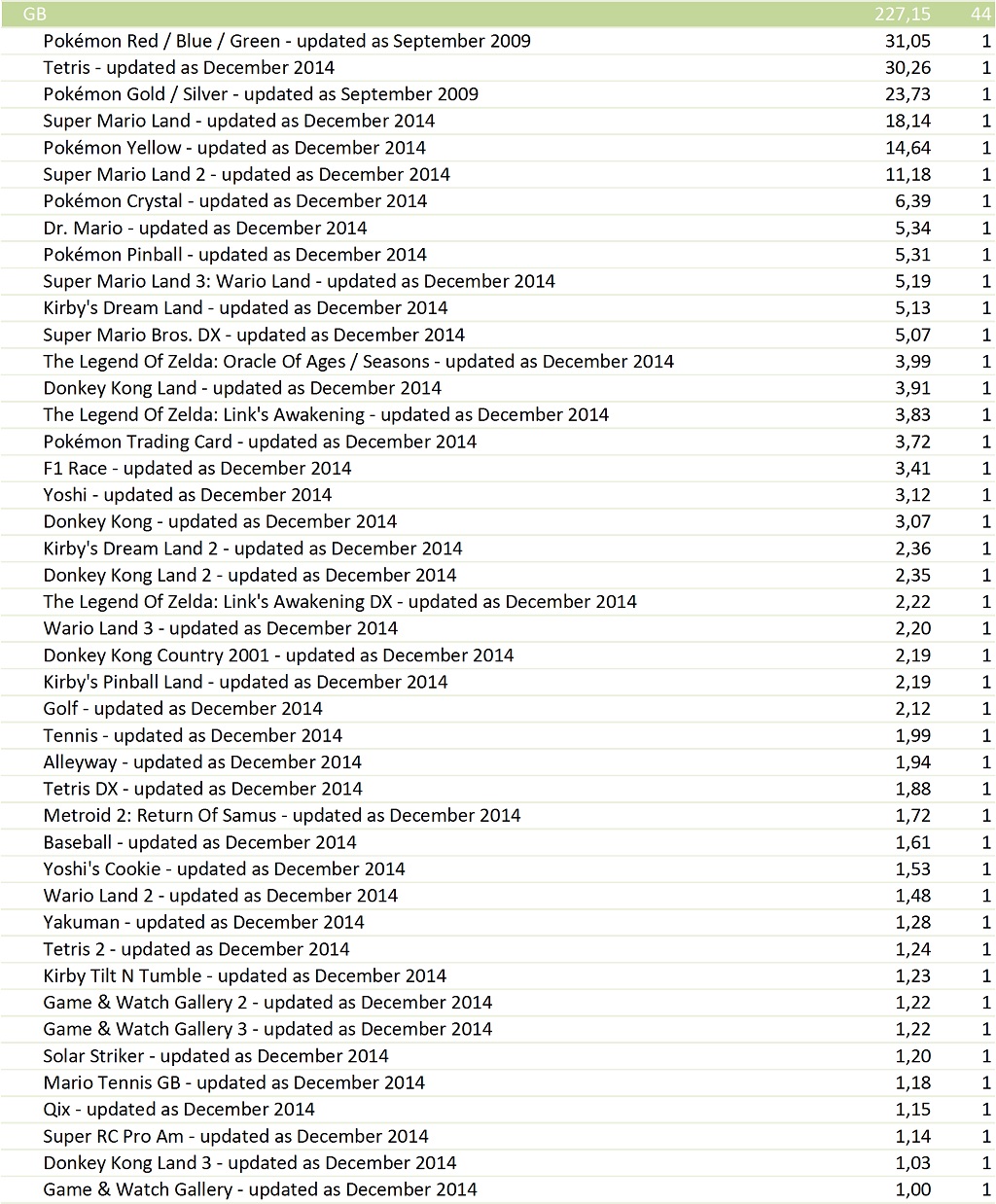 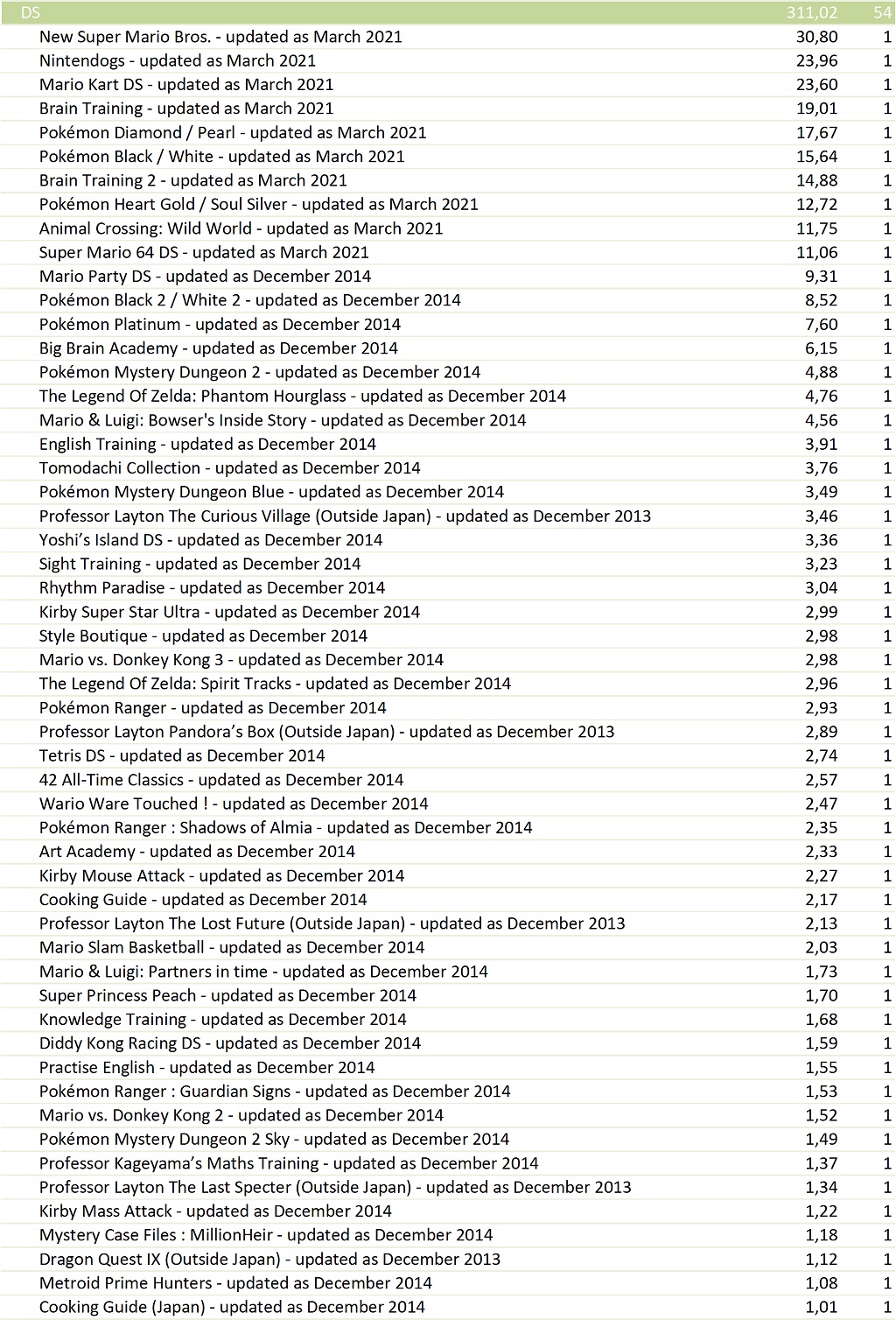 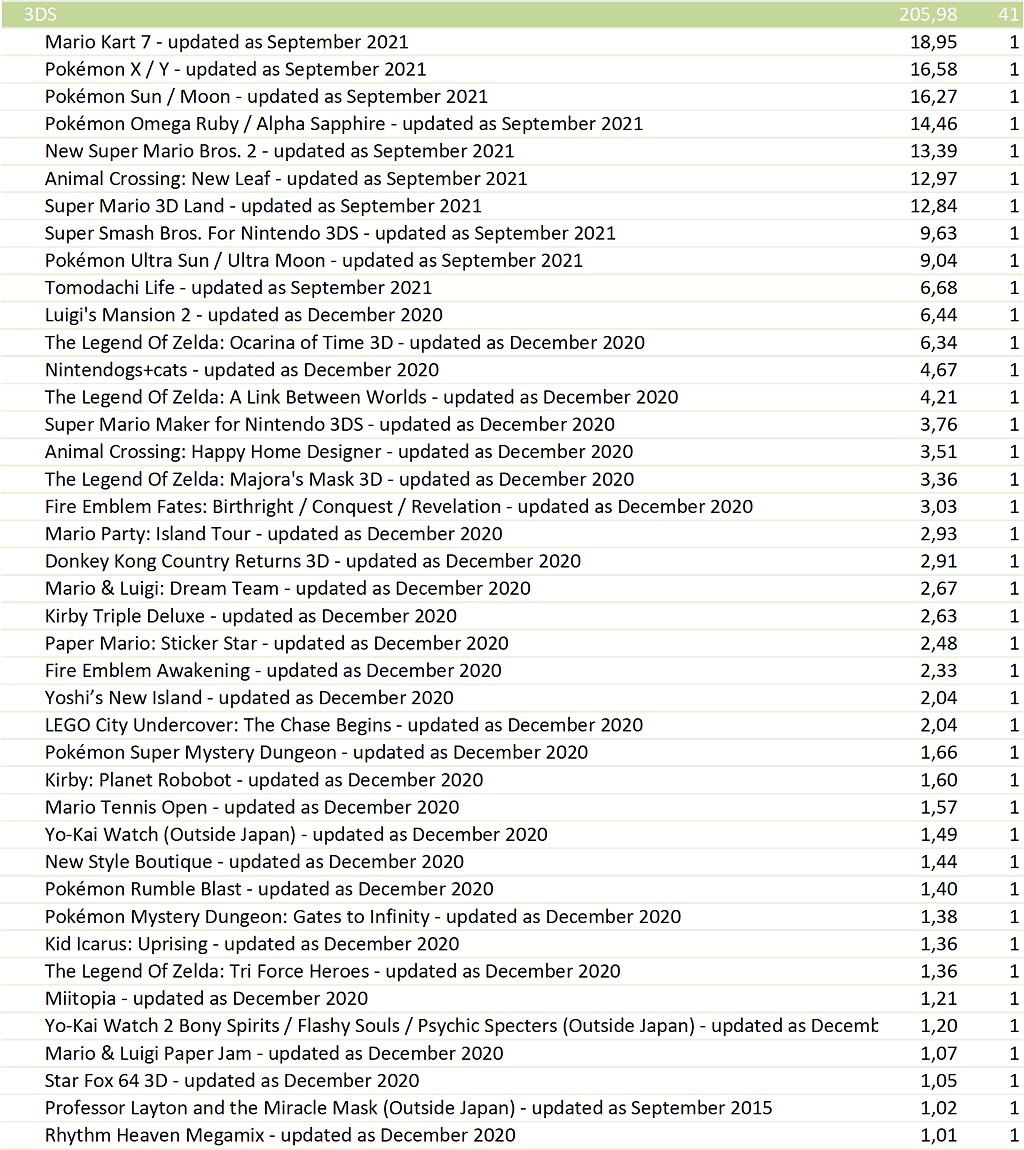 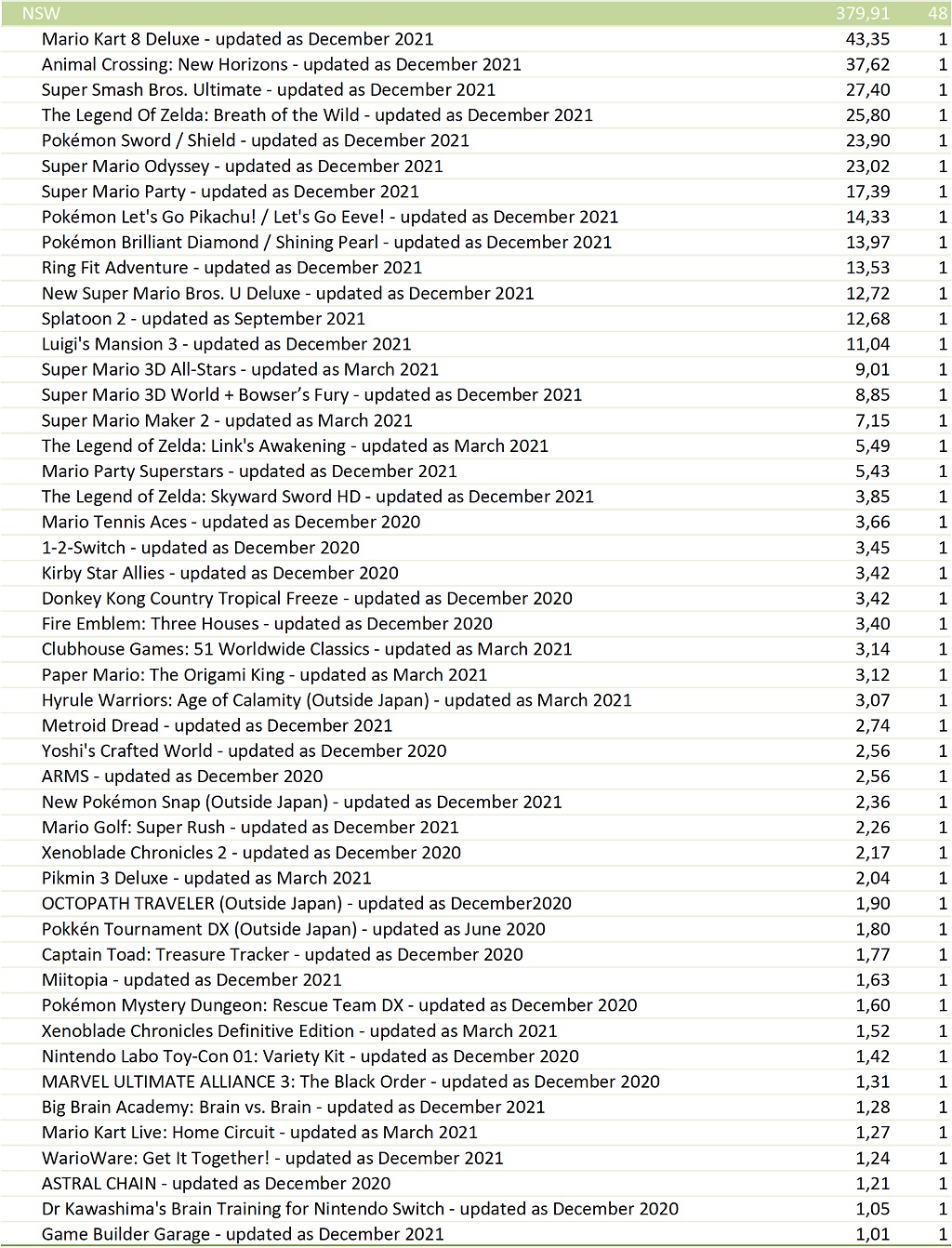 Grand total:
As of December 2021 Nintendo has published more than 380 million seller and has sold more than 2.10 billion games. 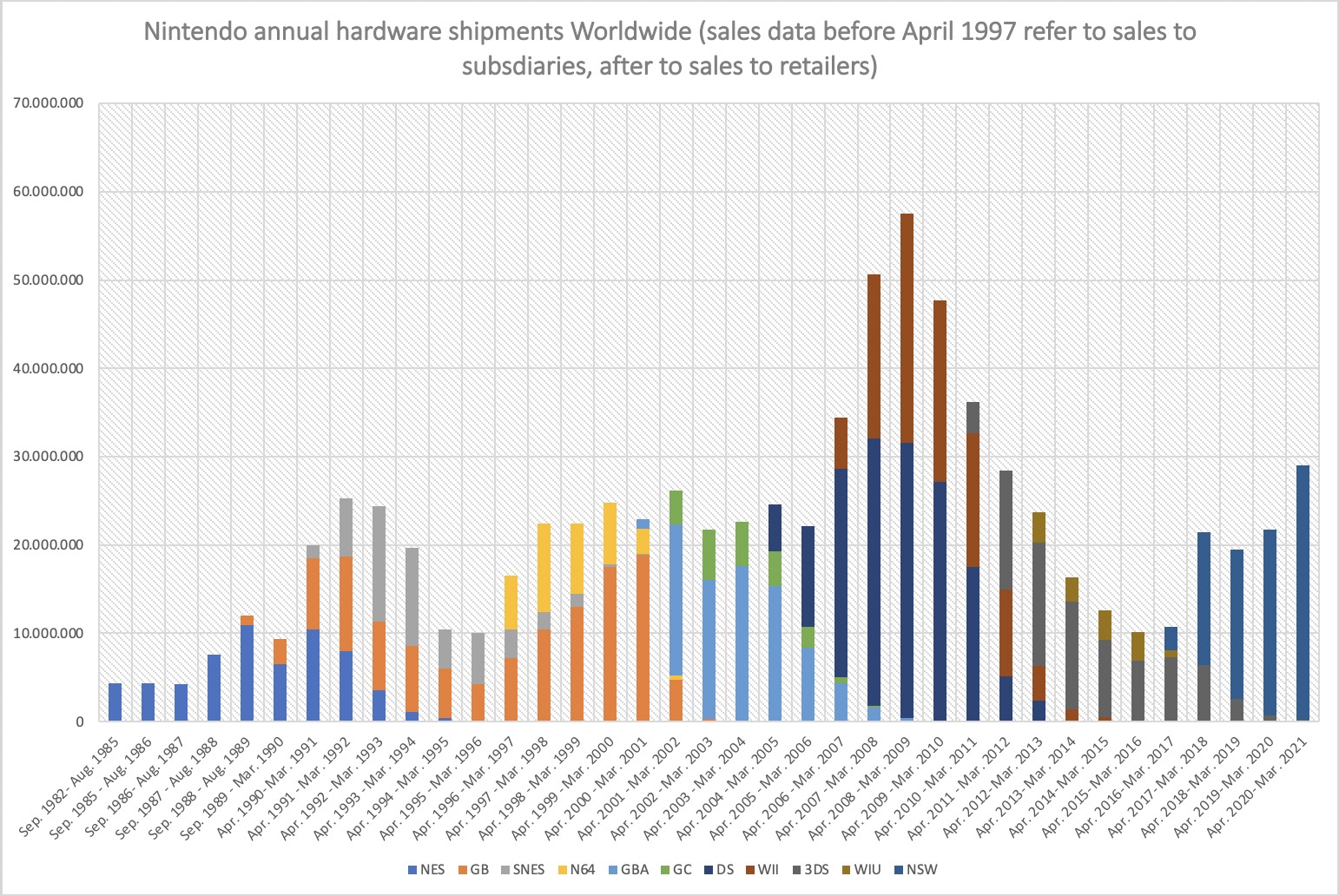 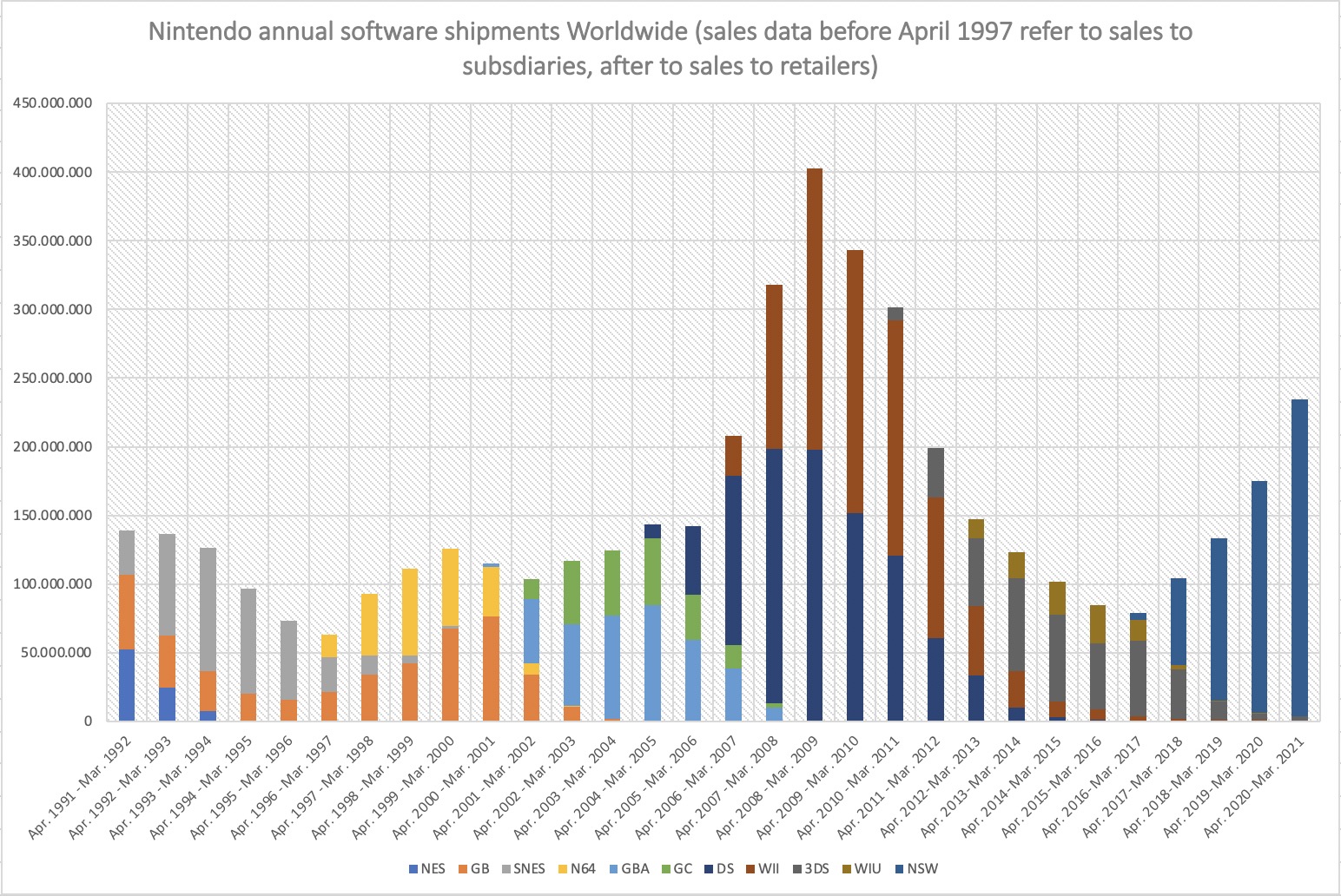 Note that what is referred as "First-party total software sales" in the graph above is actually only the sum of Nintendo million seller games.
Of course some Nintendo games could have shipped less than 1 million units therefore this is really an approximation of "First-party total software sales".
This approximation however should be close enough to the actual value since historically Nintendo games often ship more than 1 million units therefore composing the majority of the software sales sold by Nintendo.

Nintendo Revenue, Operating and Net Income from 1981 to 2021 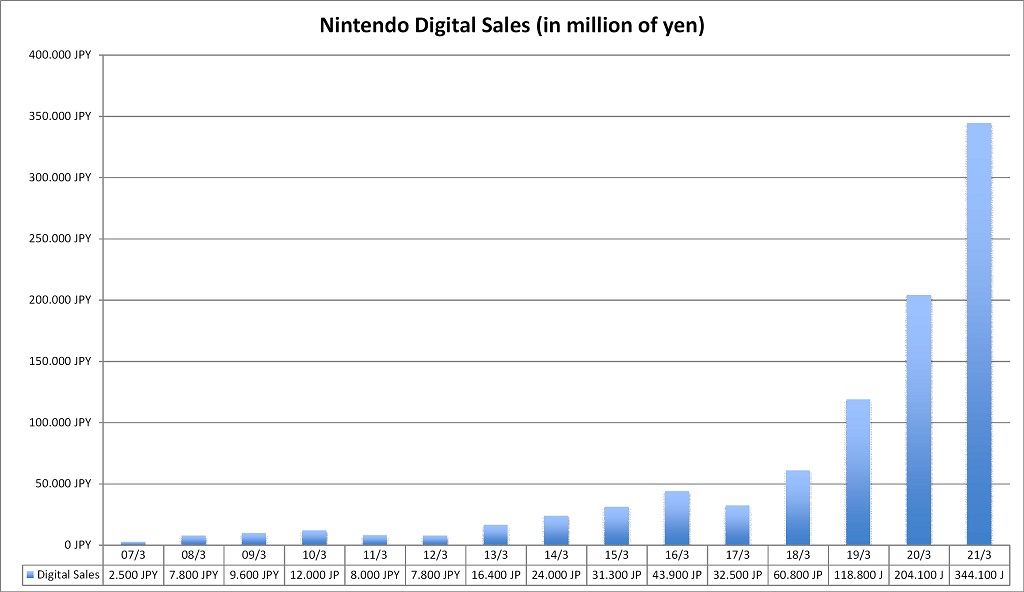 JAPAN: Nintendo software and hardware sales data from 1983 to present

I'm going to keep this thread updated with new, more up to date info whenever is possible. UPDATED WITH DATA UNTIL DECEMBER 2021 任天堂 What does the following data represent? The data here presented is either financial data or shipment data provided by Nintendo itself directly from Nintendo's...

Nintendo website where you can find useful information:
http://www.nintendo.co.jp/ir/en/

This thread is dedicated to Hiroshi Yamauchi. 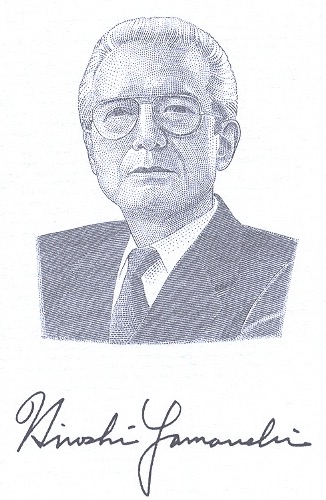